Denim has characteristics that make it entirely unique. Unlike other fabrics, it evolves with wear, getting better and better as it is worn and washed. In the first few weeks of wearing, the fabric molds to the body and begins to fade at stress and friction points. Factors such as the wearer’s physique, lifestyle, and even the climate where the jeans are being worn all play a part in how each pair of jeans fades. In other words, when two people are wearing the exact same pair of jeans, the faded pairs that result will be entirely different. This is what we love about denim!

In the Worn By series, we dive into some of the personal stories behind faded pairs, looking closely at the person who has faded the pair and trying to understand why their jeans fade in the way that they do. This will help us understand both the experience of raw denim and the reasons why high-quality Japanese selvedge denim fades in particular ways. We might know that a pair of jeans worn by an accountant will fade differently than a pair worn by a carpenter. Worn By will help us understand why.

We’re kicking off the series with a look at one of the Netherlands’ most popular window cleaners, who also happens to be a seasoned denim. We have been secretly admiring Alex for a few years now. We had never met him in person, but his reputation as an extraordinary fader preceded him. We have seen some extremely well-faded pairs of jeans from Alex in the past few years, so the moment he placed an order for a pair of Realign Denim jeans, we popped a bottle of champagne. We knew that Alex would produce beautiful fades on his pair of Tapered Yoshis. 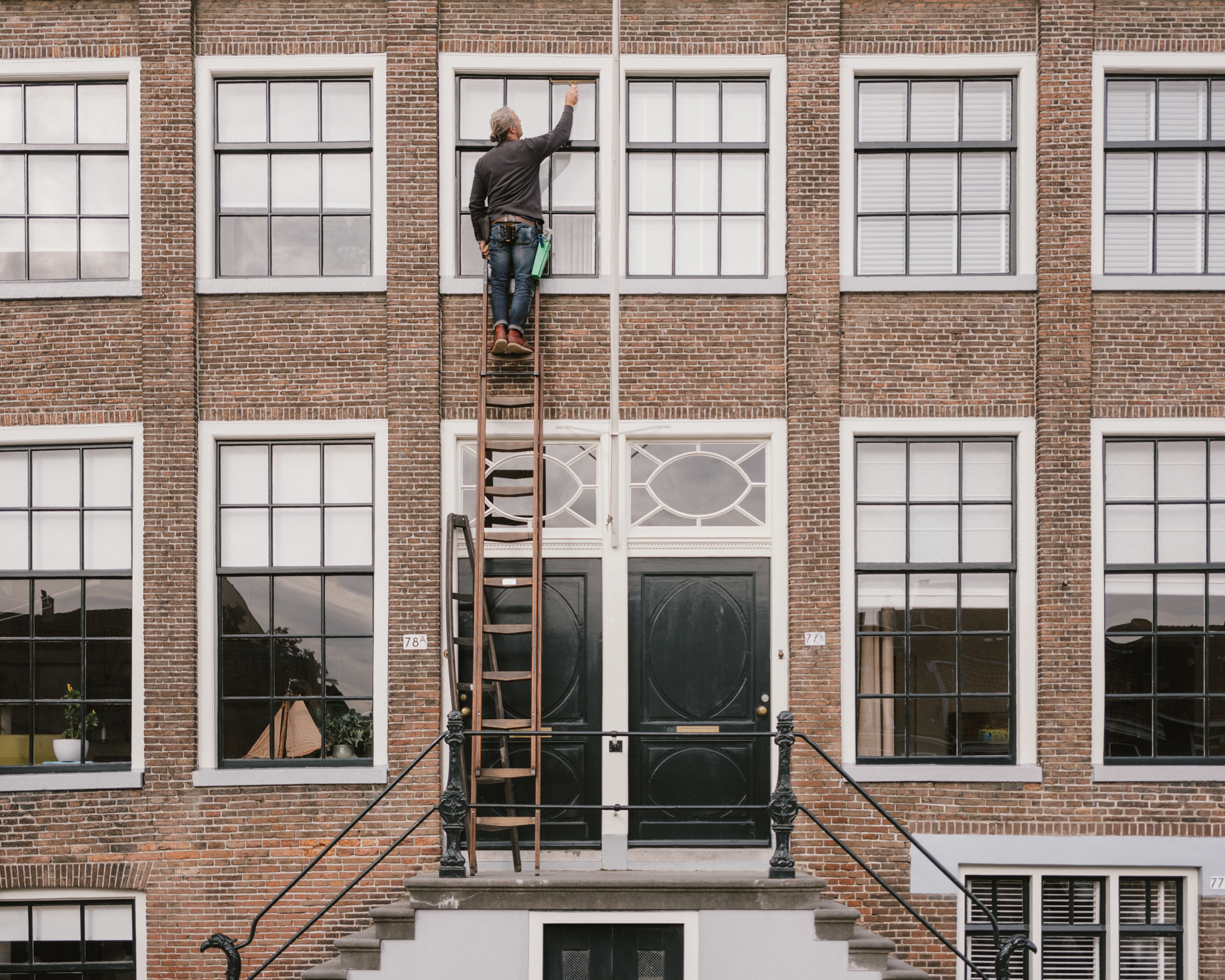 On a sunny Autumn day in October we agreed to meet Alex in his hometown Zwolle, a historical yet trendy Hanseatic city in the Netherlands. We met in the city center at one of Zwolle’s beautiful canals on what had been a regular working day for Alex. After grabbing a coffee together, we shadowed Alex while he was on the job, talking to him while he went about his work.

Alex told us that he has been working as a window cleaner for 34 years, building up a customer base year after year. Except for a few years when he was cleaning windows in Amsterdam on Saturdays, Alex has always been working in Zwolle. He is currently responsible for cleaning most of the houses and shop windows in the city center.

When he speaks about working outside, about the architecture of the canal houses, and about the bustling yet easygoing city life in Zwolle, a big smile spreads across Alex’s face – his passion is contagious. After 34 years Alex is still enjoying his work, patiently cleaning window after window day after day.

Except for his tremendous skills, Alex’s passion and reliability is his greatest asset. This has helped him grow his customer base. Generation upon generation of the business owners and residents in Zwolle are thrilled to work with him. And they trust him. Alex has the keys to dozens of homes and businesses in Zwolle, often cleaning them when the owners are elsewhere. He is a valued and trusted member of his community. Over the years, he has watched through the city’s sparkling windows, watching the city’s children grow up and turn into the city’s newest generation of home and business owners. 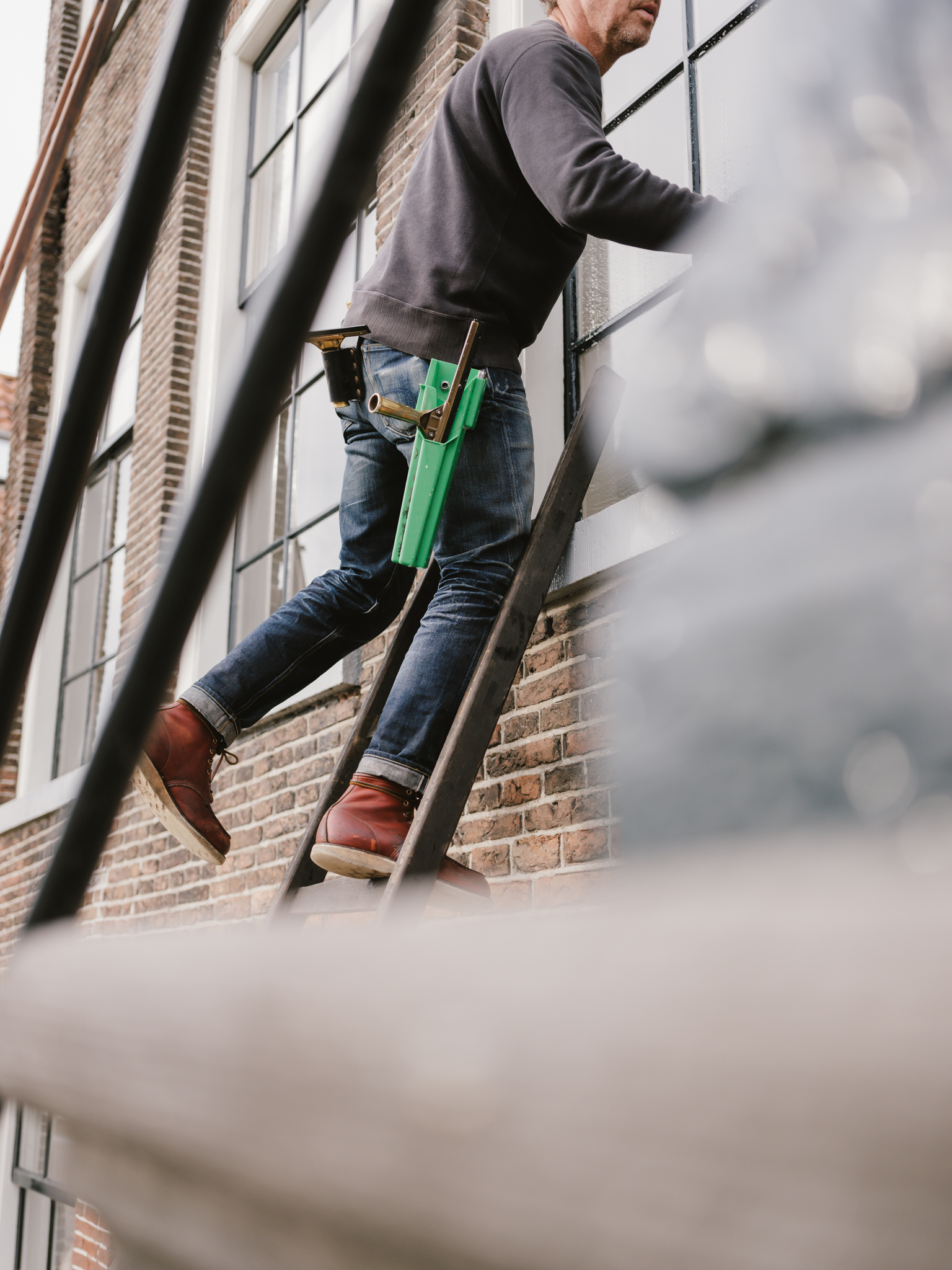 Alex calls himself an old school window cleaner. He has been working with the same materials and techniques for the past 34 years. Most window cleaners have updated their equipment in the last few decades, but Alex is still using the tried-and-true methods that he used when he started his business in 1989. His love for artisanal and well-made products means that he understands better than most why the old ways are sometimes the best ways.

Take the ladder for example. Nowadays, it is the norm to use a lightweight aluminum ladder, which is easy to handle and to carry around. Alex, though, still uses wooden ladders, which weigh as much as 80 kilos. He has developed a special technique to handle and carry these ladders, making sure that he damages neither the ladders nor the homes or businesses he’s working on. He gets his ladders from artisanal craftsmen who have been making the wooden ladders by hand for decades. He says that, when they stop making these ladders, he’ll hang it up for good. He brings the same kind of approach to his his soap, his window squeegee, and, of course, his workwear. 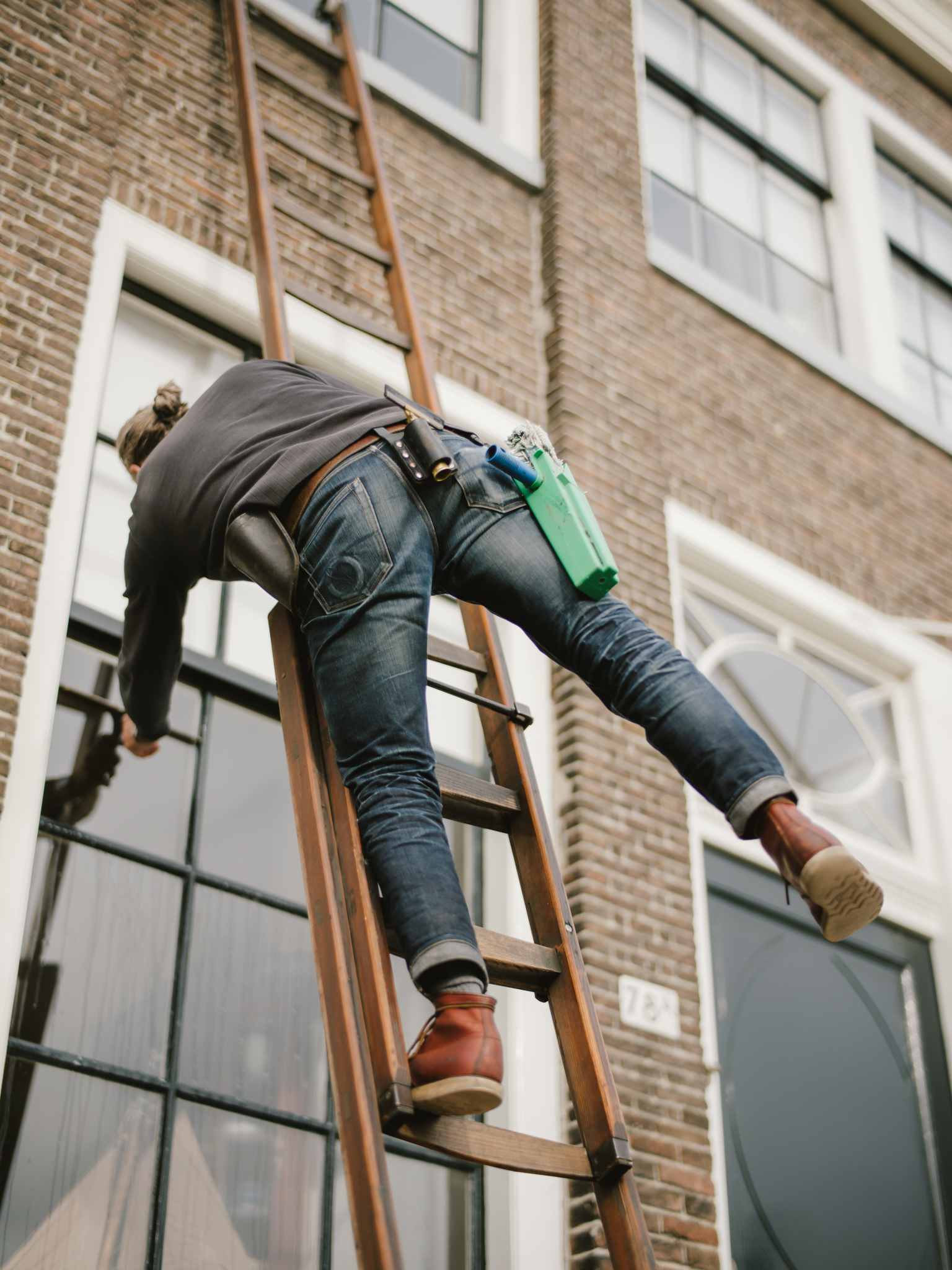 For years, Alex cleaned the windows at Tenue de Nîmes and Red Wing Amsterdam. This introduced him to the world of high-quality denim and boots. He says that these products work perfectly as workwear for a window cleaner, especially a pair of heavyweight denim in the autumn and the winter. “Why wear boring work clothes,” he ask, “when Japanese selvedge denim works at least as well?” After years wearing well-made selvedge, Alex has worked his way through several pairs of jeans and boots. A number of these are now displayed in shop windows as examples of what the products will look like when worn well.

Looking for a new pair of jeans for last fall, Alex decided to purchase a pair of Realign Tapered Yoshi’s in the 16 oz. Structure Selvedge fabric. Realign popped up on his radar, and he was drawn to the details, the fit, and their limited availability. The 16 oz. Structure Selvedge was the perfect weight for the cold winter days, and he hoped that the jeans would be able to withstand the abuse that he subjects his pairs to. Alex loves the Tapered Yoshi fit as it provides a bit more room in the topblock allowing him to climb his ladders and to move freely.

After seven months of daily wear, the Tapered Yoshis are still going strong. Compared to previous project pairs, the Realigns haven’t ripped or torn anywhere. He knows that some of the hardest days are ahead for the pair, so he’s reinforced the crotch to prevent a blowout when he’s on the job, but otherwise, he’s been able to make it without any other repairs. 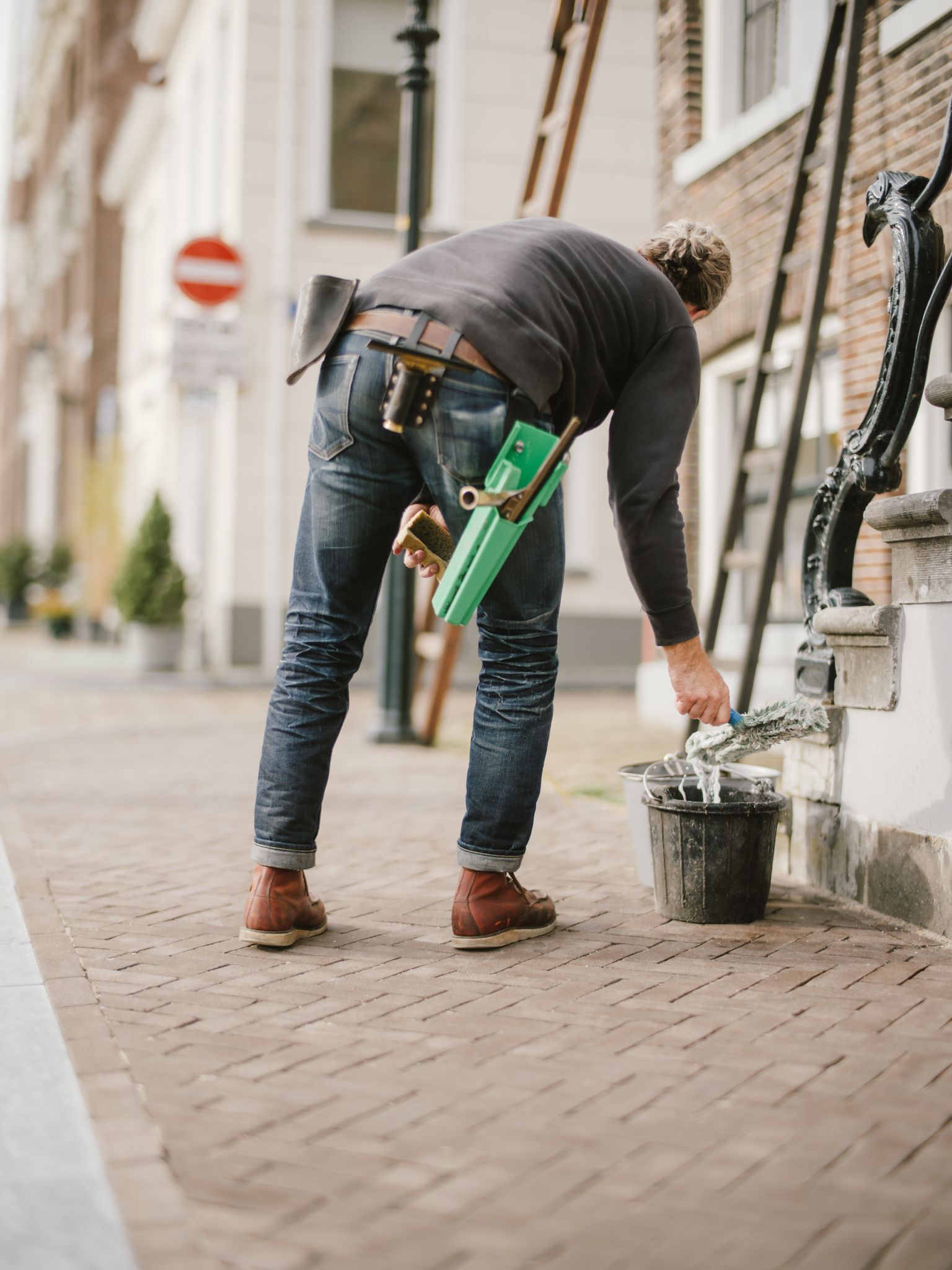 THE FADES ONLY A WINDOW CLEANER CAN ACHIEVE

Denimheads are hydrophobic. We have convinced ourselves that water somehow ruins fade potential. While it is true that throwing raw denim in the washing machine every few days is a bad idea unless you regularly work with sewage, Alex is proving that we don’t have to be afraid of the water. On the contrary…

Alex drenches his jeans regularly while he’s on the job. Added to this is the strain that he puts the denim under by climbing up and down the ladders all day. He fades like only a window cleaner can. The front of the jeans has lost nearly all of its indigo, creating sharp contrasts between the less-faded parts. Alex is showing the true potential of the 16 oz. Structure Selvedge. His signature shin and honeycomb fades are like nothing else. His jeans are a tool of the trade, and he’s clearly hard on equipment.

We thank Alex for his hospitality, for giving us insight in his profession, and for help us kick off the Worn By series. You might not be able to fade your Realigns exactly the way that Alex has faded his, but this is the beautify of selvedge fading! Challenge yourself to produce fades as beautiful as these on your Realigns. It might take you some time, but you’ll be glad you took the challenge.

Head over to our webstore to check the current Realign offering and to check all details. 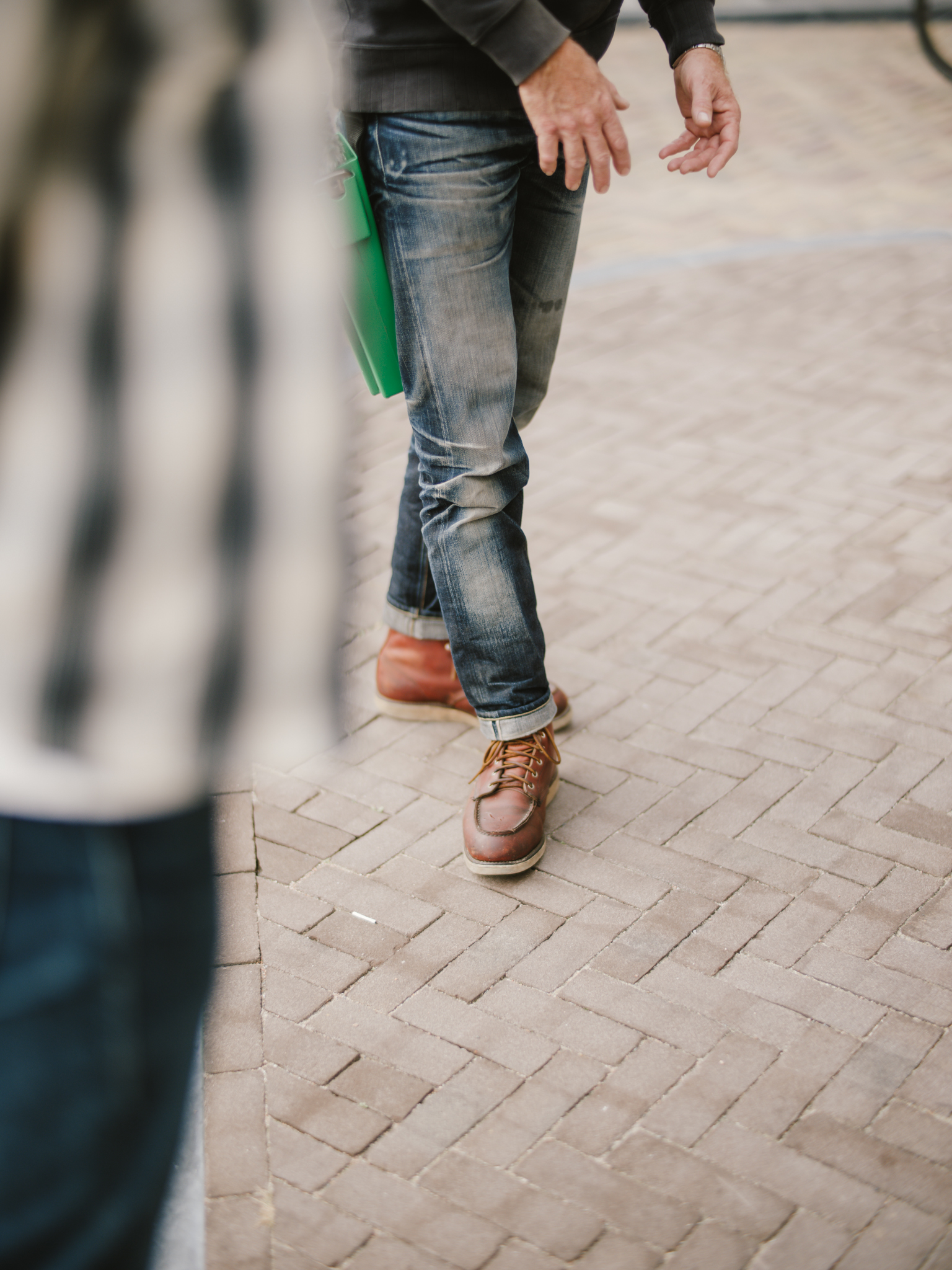 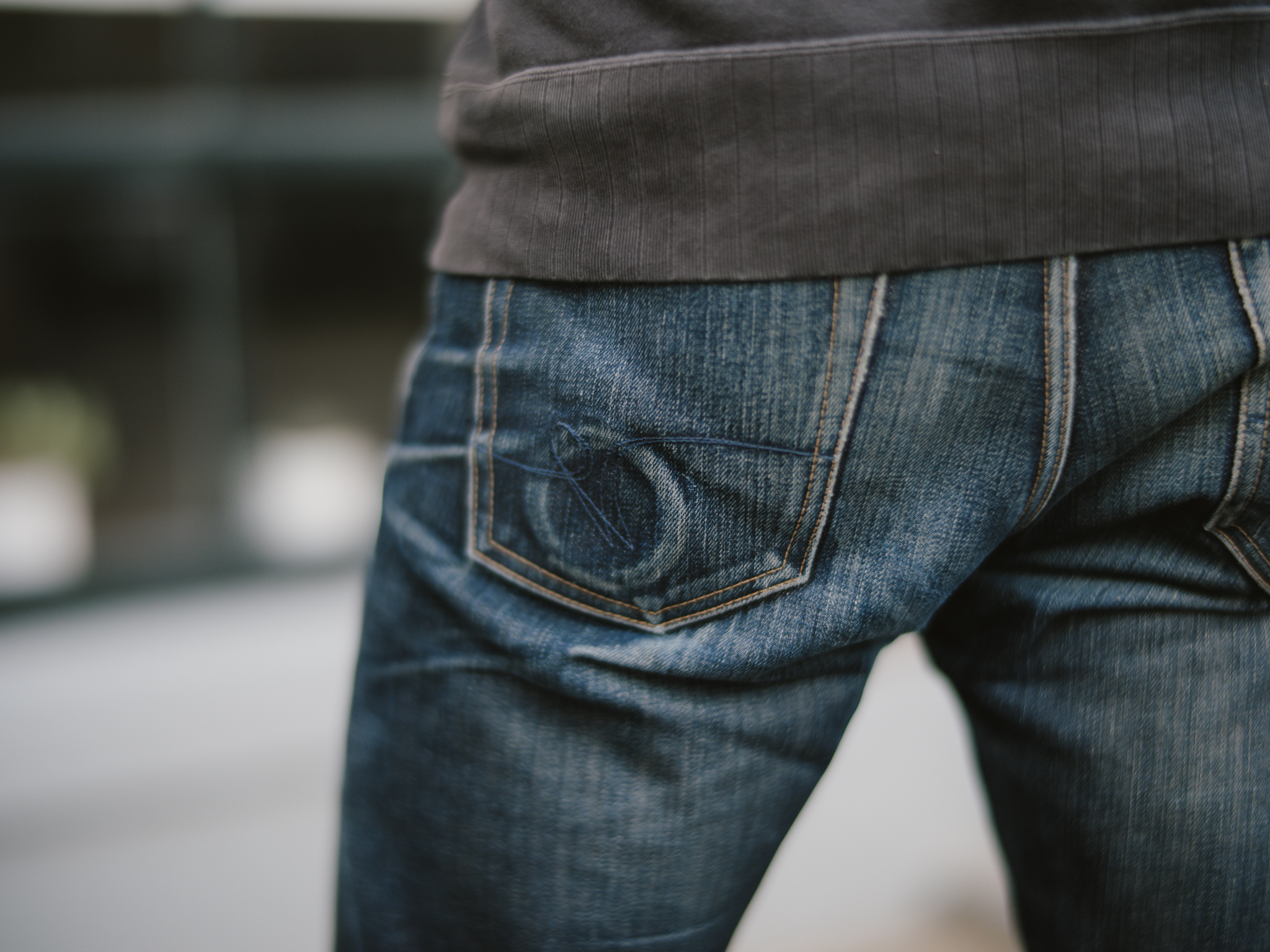 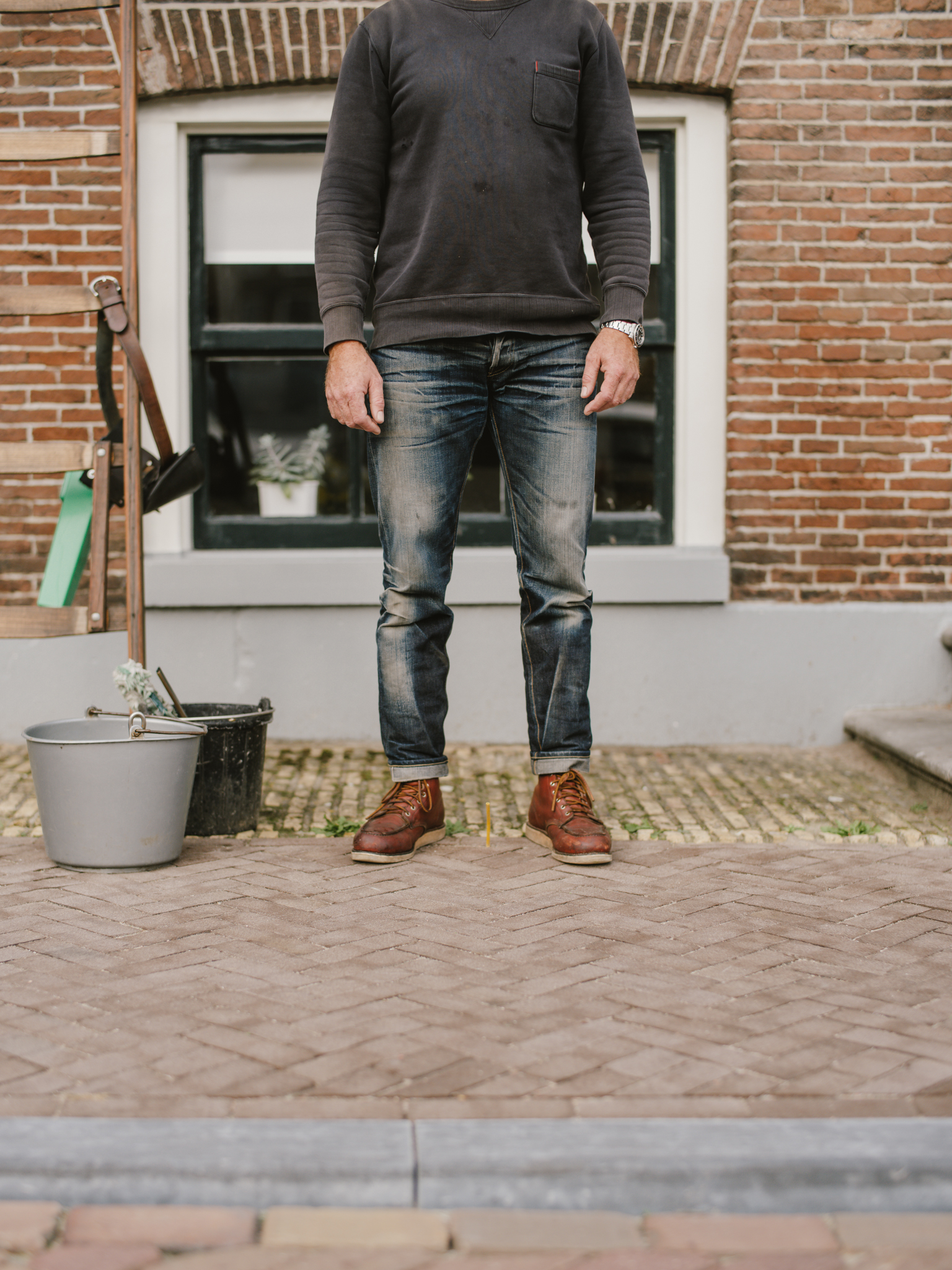 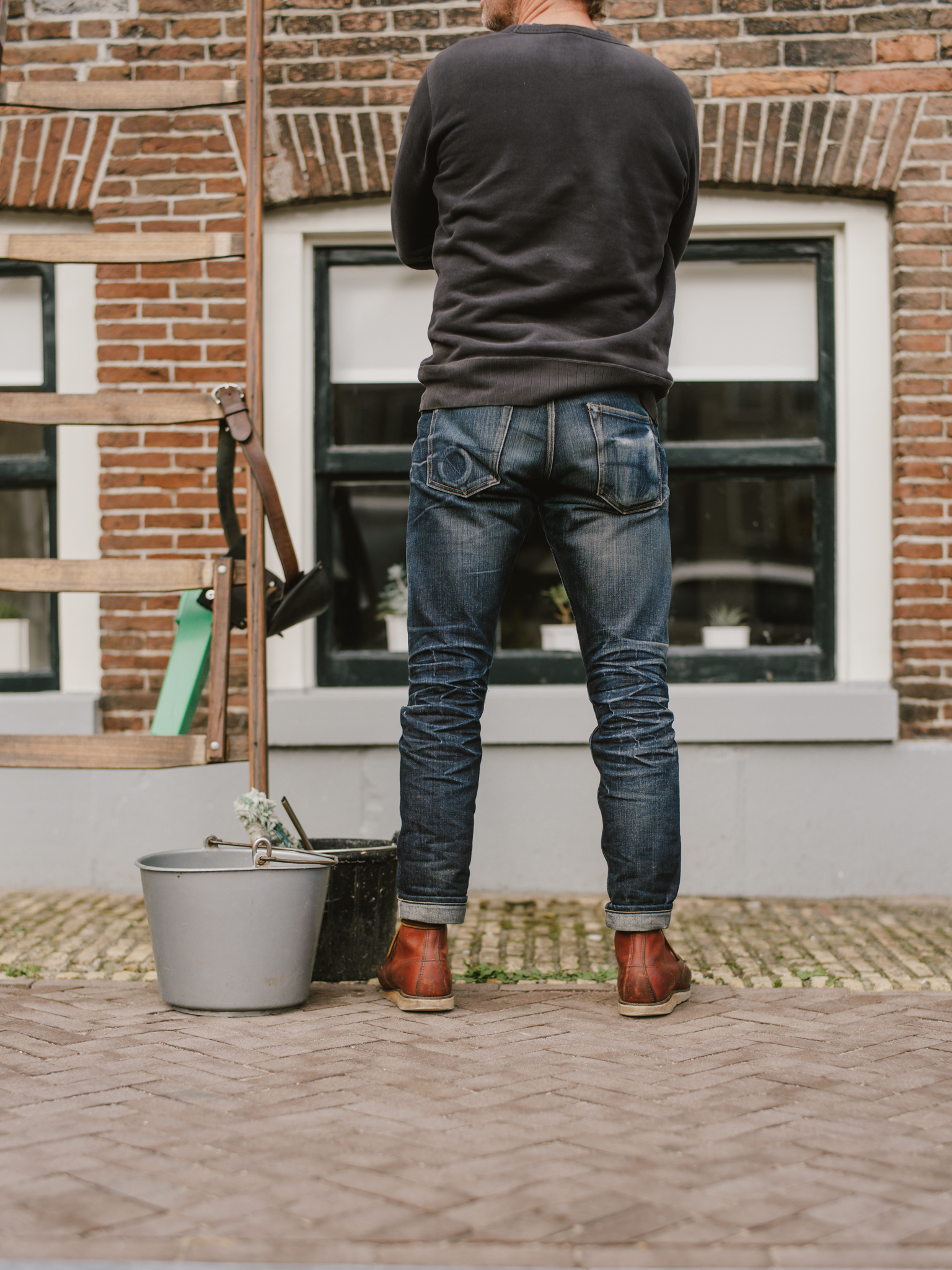 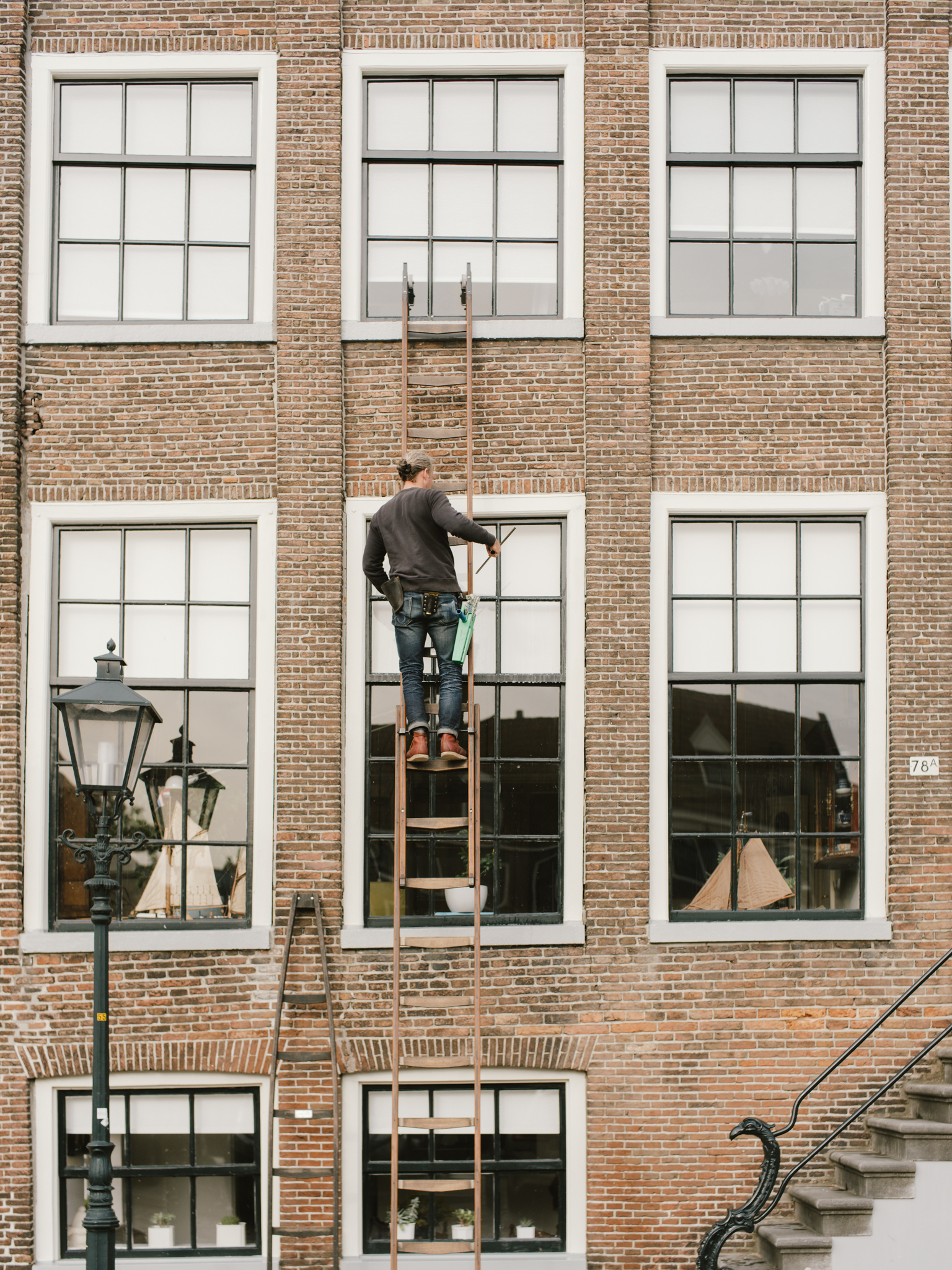 Tour de Nîmes uploaded the most detailed review to date

Beautiful denims can only take a brand so far. The silhouette makes or breaks the pair, determining how the pair feels, how it looks, and how it works with other items in your wardrobe.

'The 14 oz. ‘Indigo x Indigo’ selvedge denim fabric consists of indigo warp yarns and indigo weft yarns. This is a contrast to a more traditional..'

Tour de Nîmes uploaded the most detailed review to date

'As we are keen supporters of the Indigo Invitational, Bryan and Dave were eager to review the Realign RLGN-R. After scrutinizing the jeans with surgical precision,..'

This website uses cookies to improve your experience while you navigate through the website. Out of these, the cookies that are categorized as necessary are stored on your browser as they are essential for the working of basic functionalities of the website. We also use third-party cookies that help us analyze and understand how you use this website. These cookies will be stored in your browser only with your consent. You also have the option to opt-out of these cookies. But opting out of some of these cookies may affect your browsing experience.
Necessary Always Enabled
Necessary cookies are absolutely essential for the website to function properly. These cookies ensure basic functionalities and security features of the website, anonymously.
Functional
Functional cookies help to perform certain functionalities like sharing the content of the website on social media platforms, collect feedbacks, and other third-party features.
Performance
Performance cookies are used to understand and analyze the key performance indexes of the website which helps in delivering a better user experience for the visitors.
Analytics
Analytical cookies are used to understand how visitors interact with the website. These cookies help provide information on metrics the number of visitors, bounce rate, traffic source, etc.
Advertisement
Advertisement cookies are used to provide visitors with relevant ads and marketing campaigns. These cookies track visitors across websites and collect information to provide customized ads.
Others
Other uncategorized cookies are those that are being analyzed and have not been classified into a category as yet.
SAVE & ACCEPT